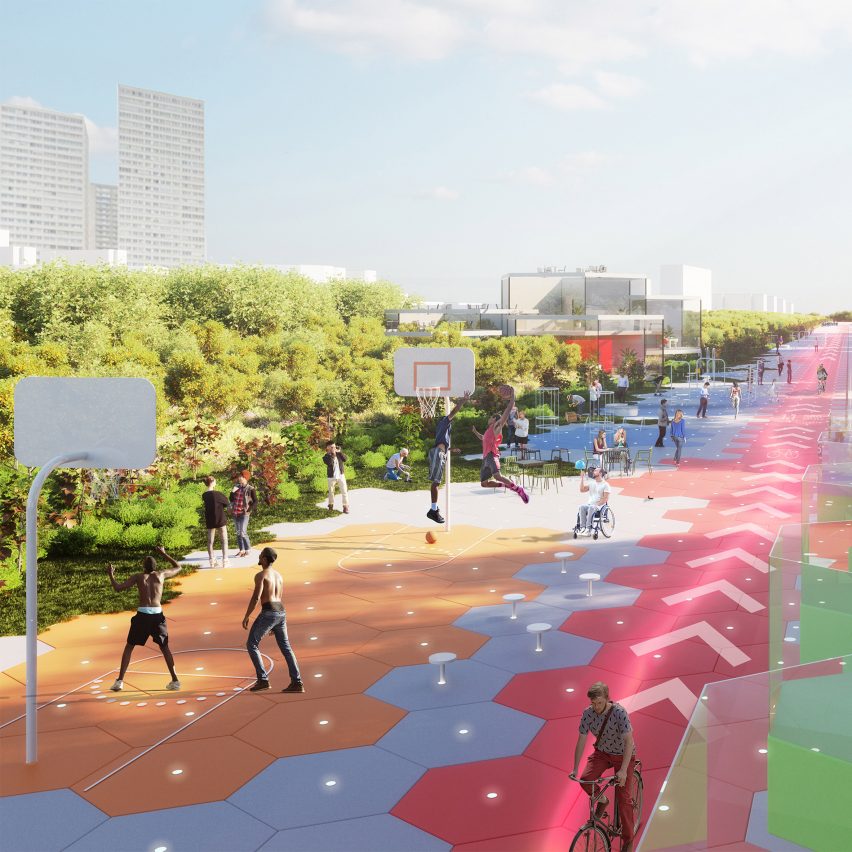 Paris’ famous Périphérique ring road could have its car lanes slashed by half and replaced by a playground in the switch to driverless cars, says Carlo Ratti.

The Italian architect, who is one of the world’s leading voices on technology in urban environments, has explored how Paris could adapt its roads to an autonomous, electric and data-rich future in five new concept designs.

Ratti‘s New Deal concepts are part of an exhibition currently on at the Pavillon de l’Arsenal, the city’s centre for architecture and urbanism. 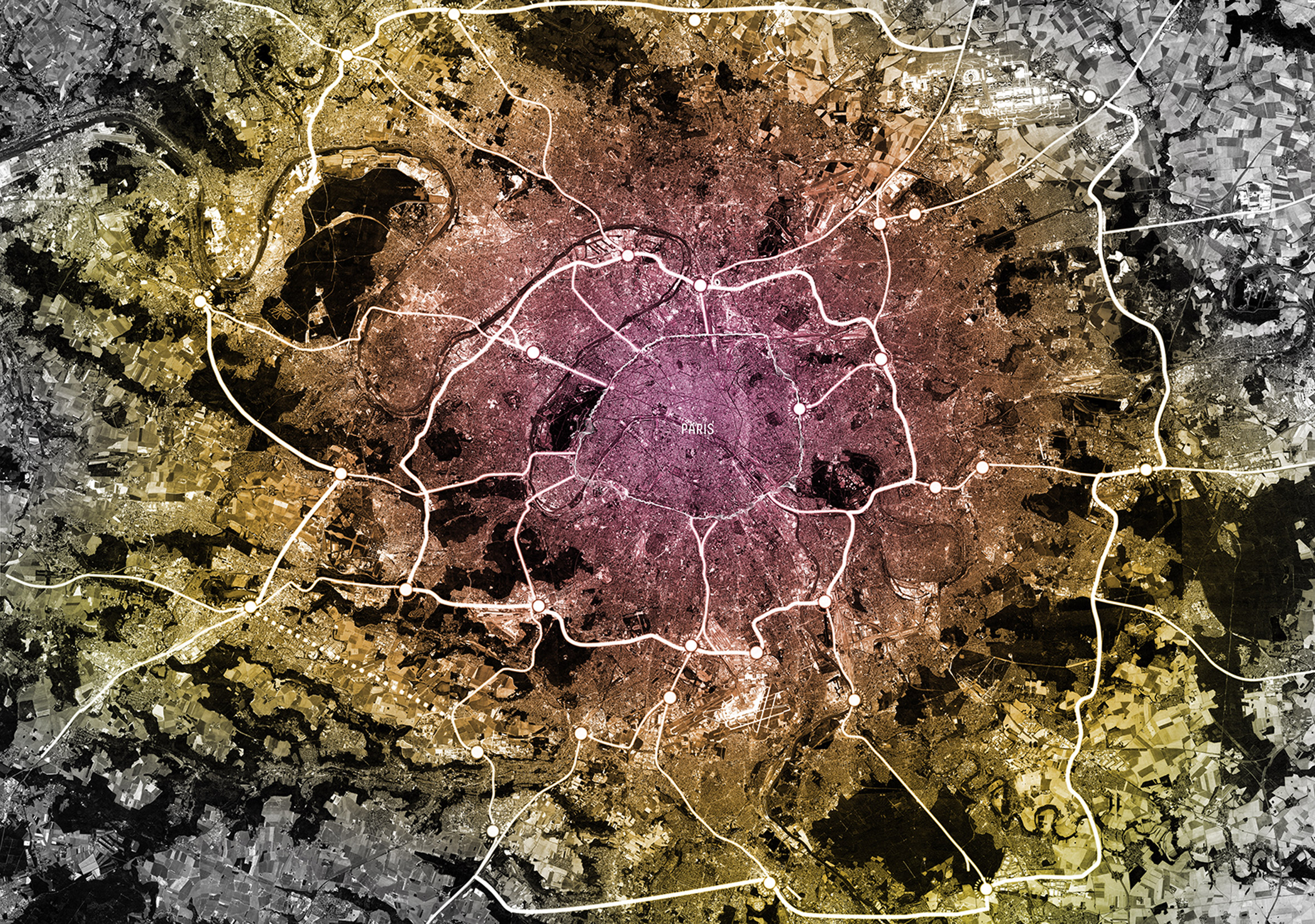 Titled Les Routes du Futur du Grand Paris, the exhibition looks at how the French capital’s major roads might evolve in the decades to 2050.

As well as the reimagined Boulevard Périphérique, Ratti’s design and innovation office Carlo Ratti Associati envisions repurposing most of the A6 highway for farming and energy production.

According to Ratti, these changes are possible because electric and autonomous vehicles (EVs and AVs) will make roads cleaner and safer.

“In the 20th century, urbanists made space for bigger roads and more cars,” said Ratti. “Today, we can leverage innovation in mobility to imagine creating a more seamless and inclusive city.” 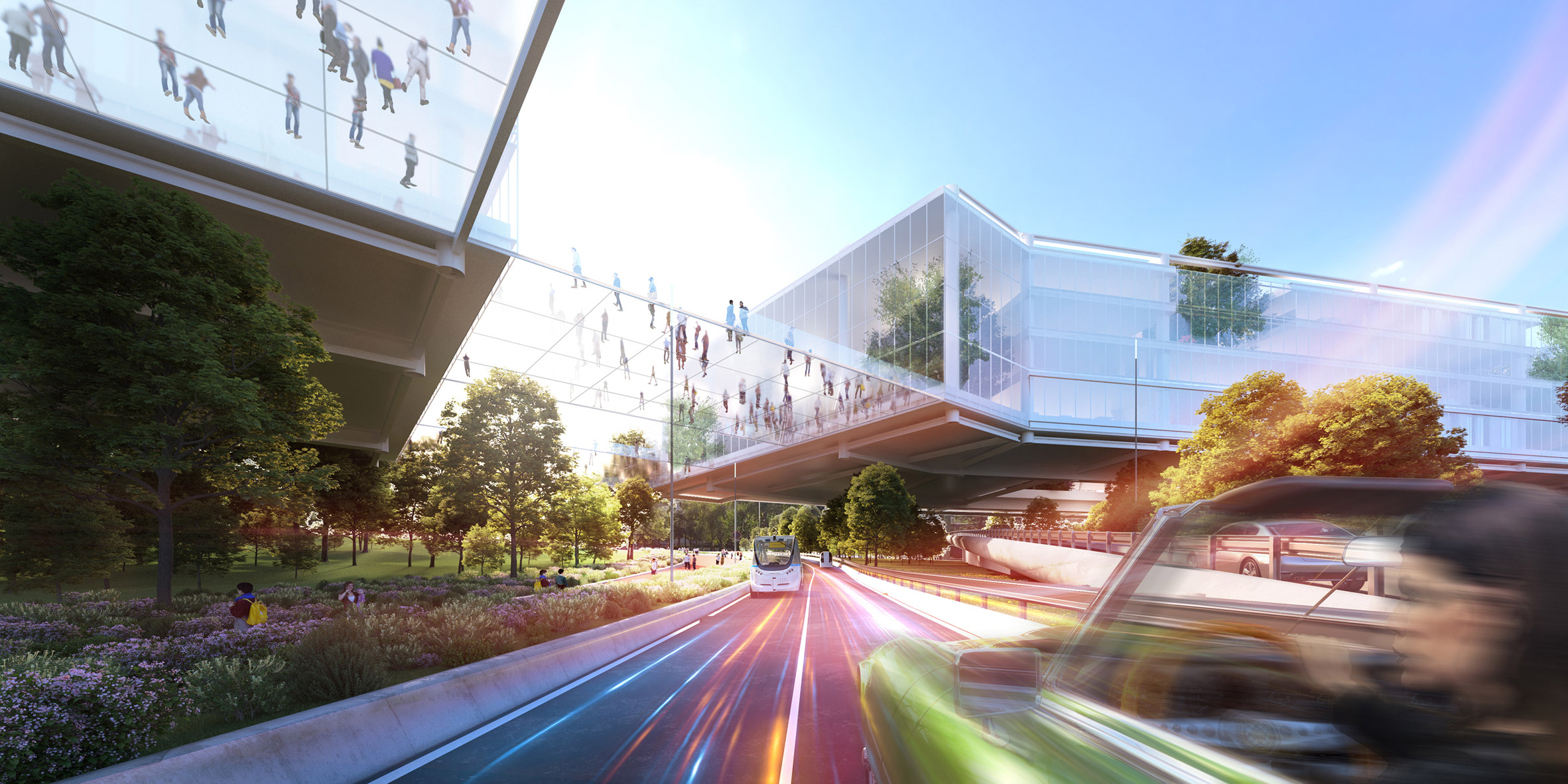 The second design for Périphérique imagines sustainable buildings above the road

The design team drew on Ratti’s research at MIT’s Senseable City Lab, which he heads, to develop the five New Deal concepts.

Two of the five designs take on Paris’ Boulevard Périphérique, whose 35 kilometres constitute the busiest stretch of road in Europe.

One concept, titled Habiter Le Lateralité (Living Laterality), imagines that with less traffic moving more efficiently on the road, the majority of lanes are given over to a reconfigurable playground instead.

The hexagonal pavers are designed to be easily picked up and moved around within minutes, meaning the same segment of street can provide different functions throughout the day. 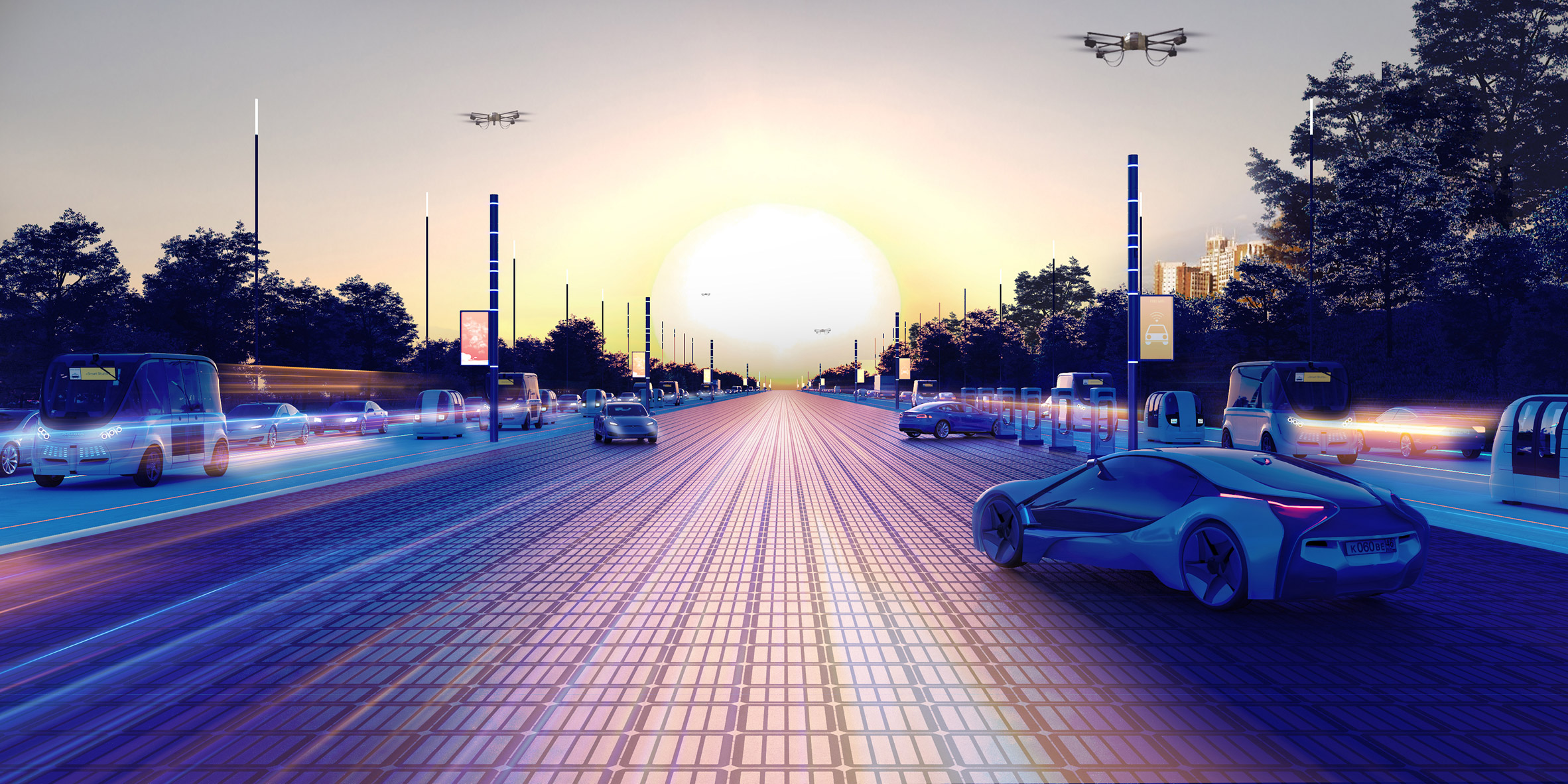 The other Périphérique concept is titled Habiter les Dessus (Living Above). It imagines green residential buildings spanning the ring road like “inhabitable bridges”. CRA points out that in its current state, the ring road sharply divides the historic centre of Paris and its outer suburbs, or “banlieues”.

The Living Above concept would have the effect of “recomposing a historical fracture between the two Parises”.

A third concept, titled La Voie Monde (The Street of the World), focuses on Paris’ massive A6 highway.

It proposes that with future technologies, its 12 lanes could be reduced down to just four, with those previously running down the middle turned into greenhouses or a photovoltaic plant generating solar energy. The concepts show EVs charging in this repurposed segment of road. 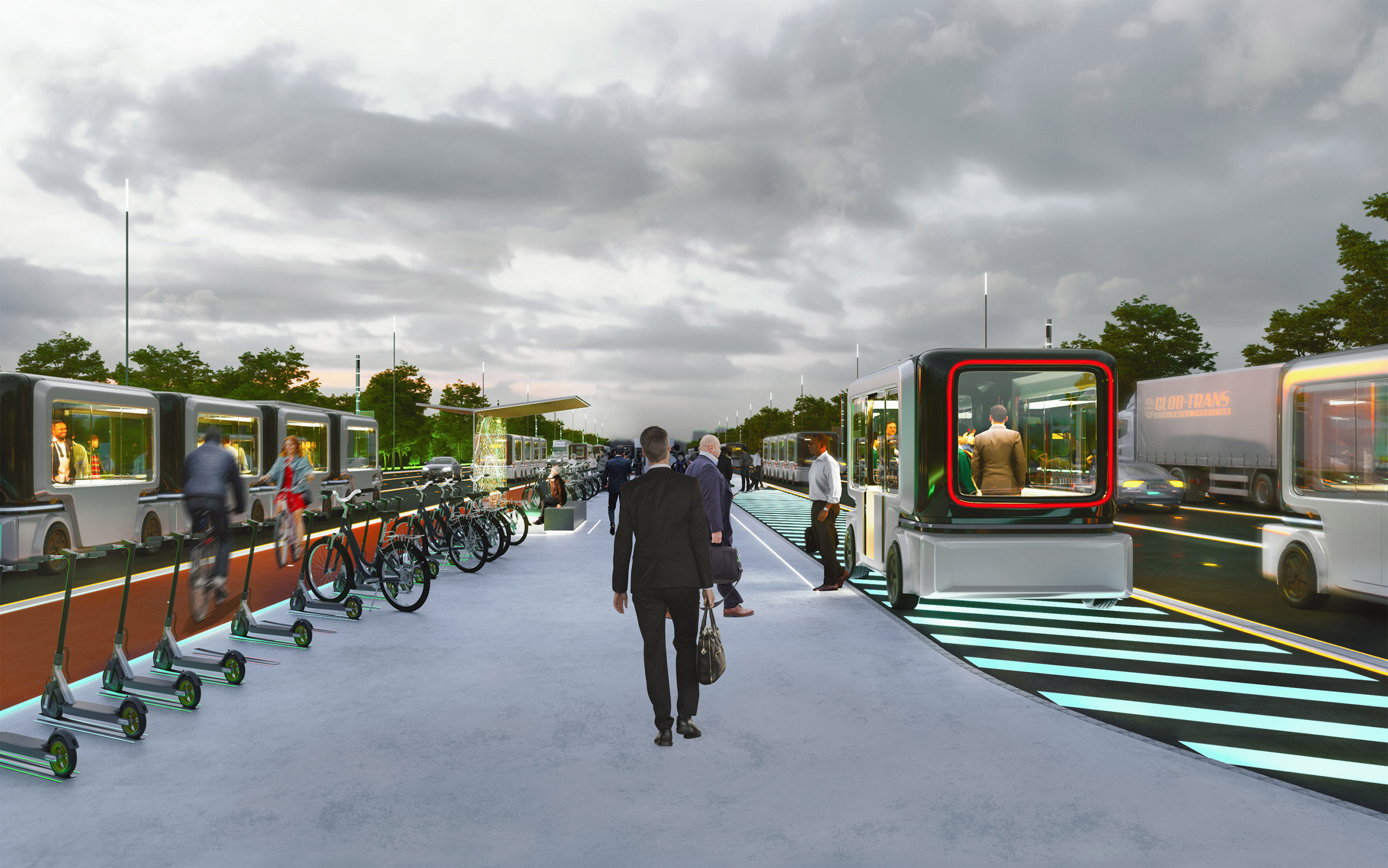 La Voie Dynamique (The Dynamic Road) suggests the possibility of these hubs appearing and disappearing at different times of the day, as they suit the transport needs of commuters. 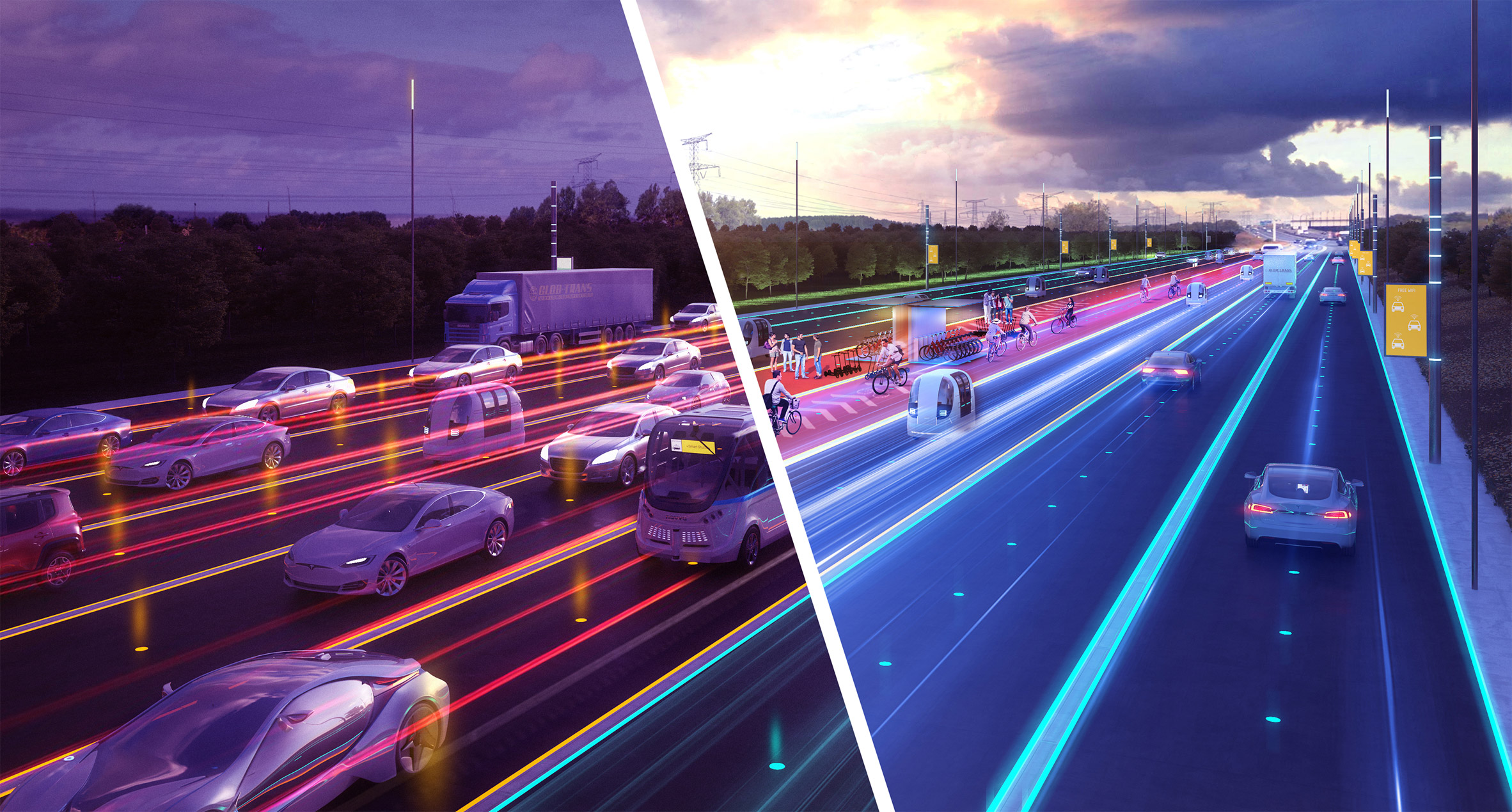 CRA is based in Turin, Italy. Among the studio’s other roads-based projects is a smart system with traffic-monitoring drones.

Ratti is currently involved in curating the Bi-City Biennale of Urbanism\Architecture in Shenzhen, the only biennale to focus on urbanism and technology.

The Les Routes du Futur du Grand Paris is organised by the Forum Métropolitain du Grand Paris. It opened at the Pavilion de l’Arsenal on 6 June and runs until 31 August 2019.

The post Carlo Ratti imagines how Boulevard Périphérique in Paris will look in 2050 appeared first on Dezeen.

Beyond Modern Farmhouse: How to Use Shiplap

What Are Cannabinoid Receptors?