Even at a standstill, a 1997 Renntech E60 RS makes a dastardly impression. Its all-stainless steel exhaust—including tubular headers, downpipes, sport resonator, and sport rear muffler—rumbles like a demon demi-lord muffling a cough, the exhale of a ported and cammed 6.0-liter V-8. This effect is enhanced under acceleration, when the car squats back on its 18-inch riveted magnesium monoblocks and puts all of that power down via a limited-slip differential and a modified version of Mercedes’ stock five-speed automatic. The legendary “Hammer,” the Porsche-built 5.0-liter Mercedes E-class V-8 of the early 1990s, produced 322 horsepower. The special-order E60 AMG of the mid-’90s made 381 horses. The RS put out a whopping 434 horsepower and a massive 525 lb-ft of torque. How do you pronounce Vorschlaghammer? 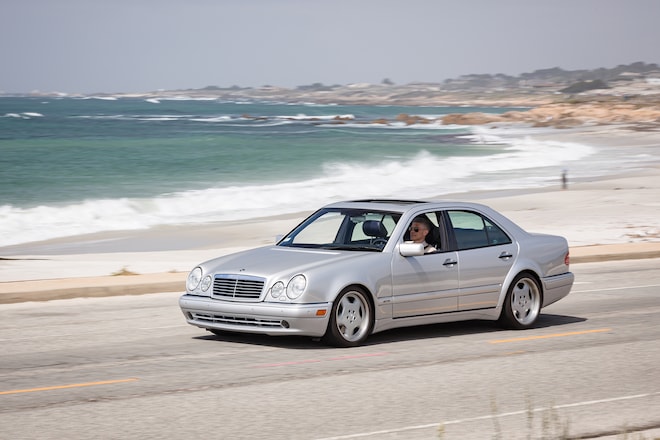 “We weren’t in full ownership of AMG then, so we contracted with Renntech to create these vehicles,” says Mike Kunz, director of the Mercedes-Benz Classic Center, a wholly owned subsidiary of Mercedes-Benz North America dedicated to the preservation, restoration, and sale of vintage vehicles from the 133-year history of the three-pointed-star. “It was more of an . . . extreme tune.”

In 1997, at the height of the popularity of his eponymous sitcom Seinfeld, comedian and TV star Jerry Seinfeld was loaned one of these cars by Mercedes-Benz. In order to do so, the brand had to order a Mercedes-Benz E420 from the factory. In addition to the $50,000 base price, the car received nearly $115,000 in upgrades carried out by then-independent AMG in Germany and Renntech in Florida. The resultant vehicle, this Renntech E60, was our steed for an afternoon romp at Monterey Car Week 2019, the annual automotive/lifestyle bacchanal that takes place each August in northern California. It even has Jerry’s initials on the sill plates. 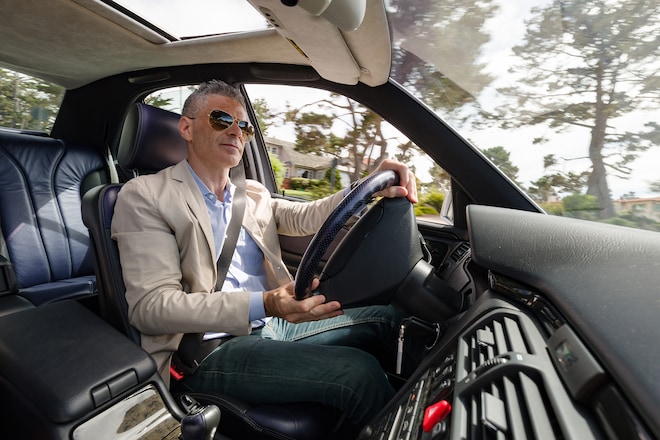 The car is now the property of the Mercedes-Benz Classic Center and has covered just over 17,000 miles in its 22-year life. But you would never know. Its two-tone seating and steering wheel are still covered in flawless condor leather in the bizarre combination of dark grey and blueberry. Its light-gray Alcantara headliner is unblemished. The bird’s-eye maple veneer trim is not delaminating like the stuff in my 1990 Range Rover. Maybe we can credit the rear subframe modifications, which added aluminum links and helm joints, and prevented the car from shaking itself to death.

“This is a standard W210 chassis,” says Kunz. “It’s as solid as a rock. But it has that wild ’90s tuning quality to it with the body kit and the three-piece AMG wheels and the aggressive exhaust tips. It was still early for us in making an extreme performance car, but it was capable of outrunning nearly anything made during that time.” 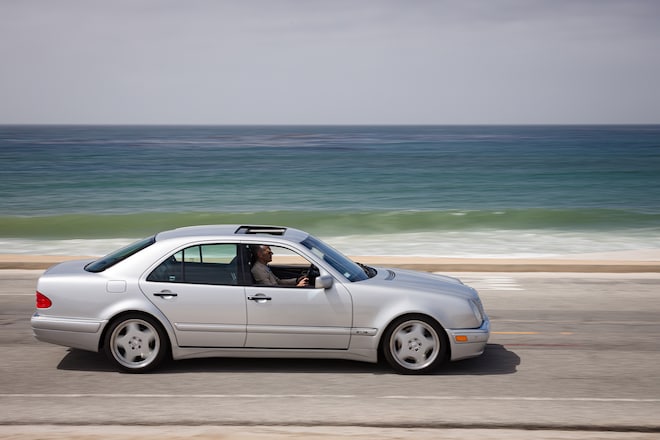 This is fortunate for us, because it meant that we could Vorschlaghammer this argent beast up and down the famed 17 Mile Drive, where the first Pebble Beach Concours and Rally took place back in the mid-1950s. You might think that a 22-year-old supercar is no match for today’s brain-melting powerhouses. But if you can control the wheelspin—no small feat—the E60 rips from zero to 60 mph in 4.6 seconds, nearly matching the acceleration of today’s E53 AMG, this despite the fact that the newer car has a nine-speed transmission and a computer-modulated all-wheel-drive system, and the old car is rear-wheel-drive only, with a five-speed. And, not that we explored this at all, but the E60 trounces the E53 in top speed, with the capacity to clear 200 mph. “Though I’m not sure you’d want to take it up that fast,” Kunz says. “Maybe with a bigger wing on the back?”

Read More
Seinfeld Sues Dealer that Sold “Fake” Car
How to Make the E63 Wagon a Better Sleeper
AMG Has a 416-HP (!) Four-Cylinder

Seinfeld kept this car for a few years before returning it to M-B. “It wasn’t new anymore, so we retrieved it,” Kunz says. “It went into storage within the company, and when we started the Classic Center, we found it there. They said they were going to crush it. We said, ‘No, you’re not.’ We got the keys and within two hours we took it. And we figured now is the time to activate it. It can help show our history with high-performance cars,” Kunz says. And it doesn’t hurt that ’90s cars are hot right now. 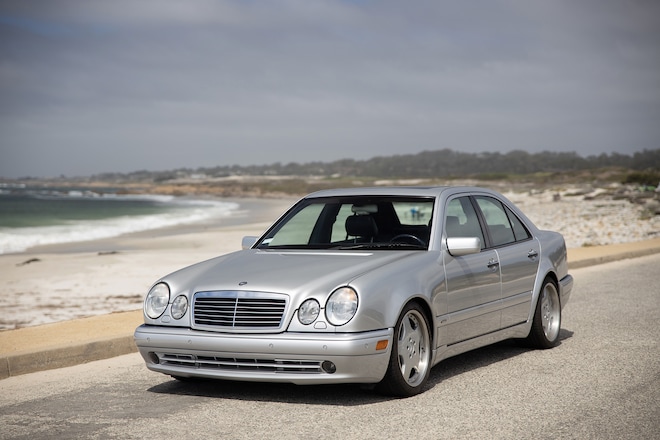 AT&T’s CEO of Communications, John Donovan, to retire in October
Bigger and taller masts lined up to improve rural phone...