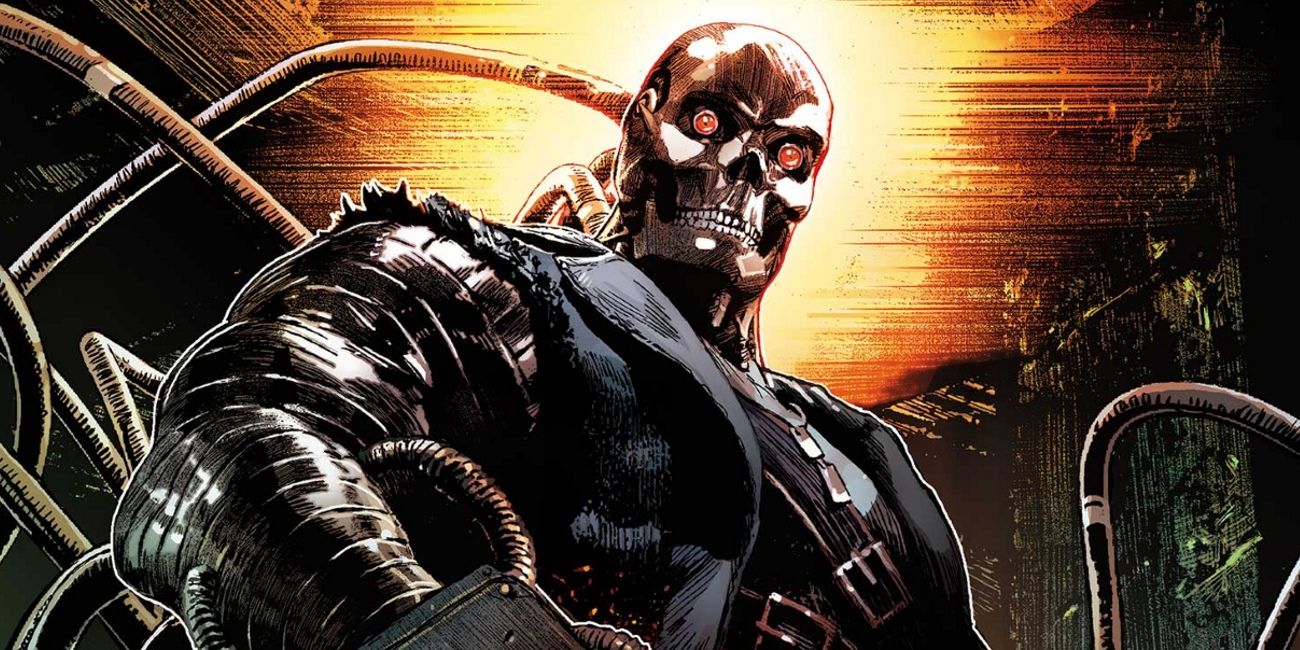 Marvel’s Ghost Rider has had many incarnations over the years, from demonic stunt cyclist Johnny Blaze, to vengeful drag racer Robbie Reyes, to the outright insane enforcer Cosmic Ghost Rider. But no Ghost Rider has ever been anything like Kenshiro “Zero” Cochrane’s Terminator-style Ghost Rider 2099. And now fans will get to see this cyberpunk Spirit of Vengeance blaze back into comics when he reappears in December’s Ghost Rider 2099 #1 one-shot as part of Marvel’s relaunch of their 2099 universe.

What makes this Ghost Rider unique? For starters, where most Ghost Riders are humans possessed by demonic entities, Ghost Rider 2099 is a creature born entirely of technology. First introduced in Marvel’s 2099 imprint of the 1990s (which offered futuristic versions of characters like Spider-Man 2099), Ghost Rider 2099 is, quite literally, a ghost in the machine. Originally a computer hacker in a street gang who stole information from corrupt corporations, Zero Cochrane is poisoned by a rival gang and–rather than allow his enemies to get the information in his brain–downloads his mind into cyberspace.

Instead of dying, Zero encounters the Ghostworks, an artificial intelligence concerned that human corruption will destroy the world’s technological infrastructure. The Ghostworks resurrect Zero to serve as their avatar in the physical world and download his consciousness into a Terminator-like Cybertek 101 warbot, transforming him into Ghost Rider 2099. As a modified warbot, Ghost Rider 2099’s body is superhumanly strong, extremely durable, and literally loaded with weapons. He possesses optic lasers, a flaming chainsaw, and a blade that can cut at a submolecular level. He also has holographic and stealth systems capable of rendering him invisible, letting him look like other people (including his original human self), or surrounding his metal skull in illusory flames. Like all Ghost Riders, Zero owns a powerful vehicle – in his case, a Ford Velociraptor 900 hoverbike with thrusters and anti-gravity propulsion. 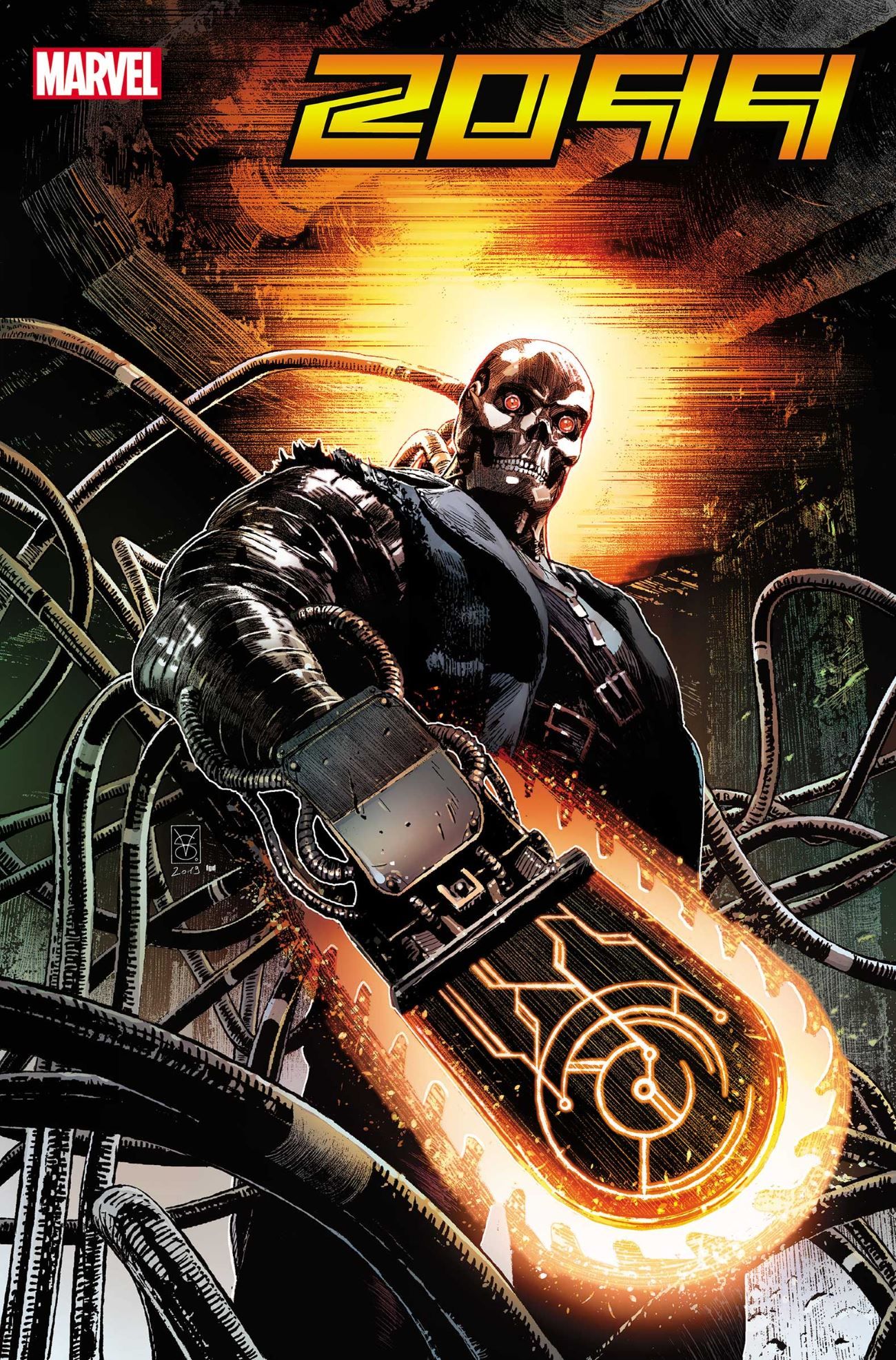 Ghost Rider 2099’s mission pits him against many adversaries in his home turf, the dystopian Transverse City, including the D/Monix corporation, his treacherous father Harrison Cochrane, and even the Ghostworks, who try to modify his personality to make him less independent. While the one-shot 2099 Manifest Destiny, which ends in the year 3099 shows Zero evolving past his Ghost Rider persona to run the Ghostworks and secretly aid Miguel O’Hara (aka Spider-Man 2099) usher in a golden age, the upcoming Ghost Rider 2099 #1 will likely focus on Ghost Rider’s earlier violent exploits in Transverse City. Although the new book is advertised as a one-shot, Ghost Rider 2099 also appears on the cover of 2099 Alpha #1, hinting he’ll make additional appearances in Marvel’s other 2099 books.

Given the popularity of science fiction sagas like The Matrix, Ghost Rider 2099 provides a fun way to tell classic Spirit of Vengeance stories in the futuristic cyberpunk genre. Considering how Ghost Rider has been reinterpreted successfully in many genres, from a prehistoric mammoth-riding Spirit of Vengeance who joined the Avengers of One Million B.C., to Carter Slade’s Western-themed Devil’s bounty hunter in 2007’s Ghost Rider movie, it’s a sure bet comic fans will be eager to see what Marvel has in store for this iteration when Ghost Rider 2099 #1 roars into comic book stores in December.

GHOST RIDER 2099 #1 (2019)Released on: December 4th, 2019Written by: Ed BrissonArt by: Damian CouceiroCover by: Valerio GiangiordanoSPIRIT OF VENGEANCE OVERDRIVE! It’s the city that never stops! Welcome to Transverse City, where everything’s for sale—if you’re fast enough to take it! Kenshiro “Zero” Cochrane was just your average keyboard cowboy until he shocked with the wrong people and got murdered—life’s a glitch, ain’t it? Now, with a second chance from a higher power and an advanced weaponized automaton, Zero will punish those who have spilled innocent blood!

Next: Marvel’s GHOST RIDER Family Is Back With a Vengeance

The siphon and the forge