By MalcolmM
7 months ago7 months ago
3views
0
ShareTweetSubscribe
, 0 points 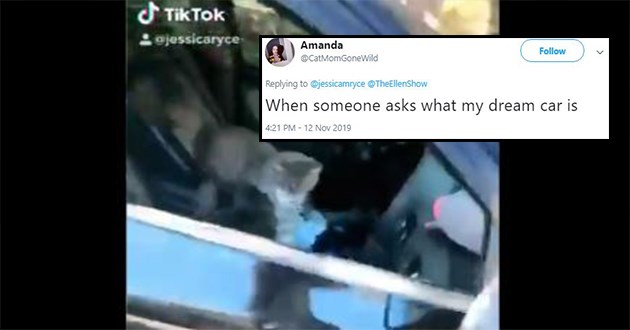 In a hilarious video uploaded to TikTok, and shared on Twitter, this mother will probably think twice about leaving her car windows down from now on!

Jessica Ryce captured the now viral video, and her mother Natasha, who left the car window down, told BuzzFeed News, “I was sitting by the pond with my parents when Jess came running and said, ‘Mom, you have to look at this,’ I have never laughed so hard in my life. It was one of those random, once-in-a-lifetime things.”

In that moment, Jessica realized something was going on and took out her phone to capture the moment.

“I was like, ‘Is that a cat in the windshield?'” Jessica Ryce told BuzzFeed. “So I started recording and I snuck up and was like, ‘Oh god!’ when I saw them all in there and they all stood and looked at me when I got to the door and then they started going crazy.”

Since the video went viral, Natasha and Jessica Ryce were flooded with positive reactions from thousands of social media users. Something that Nastasha Ryce describes as shocking to her as her encounter with the cats.

If you’re craving some extra cat-filled laughs, there are 200 best cat memes of the decade that are waiting just for you!

Mom Left Car Window Down Finds A Cat-Filled Mayhem Inside