By MalcolmM
5 months ago5 months ago
1view
0
ShareTweetSubscribe
, 0 points

It was the bridge they said could not be built. Perched at the tip of a peninsula, San Francisco was separated from the rest of northern California by the 6,700-foot-wide “Golden Gate,” an opening where San Francisco Bay flows into the Pacific Ocean. With a channel 500 feet deep, strong tides and currents, occasional fierce storms, and the threat of earthquakes, the Golden Gate seemed unbridgeable. 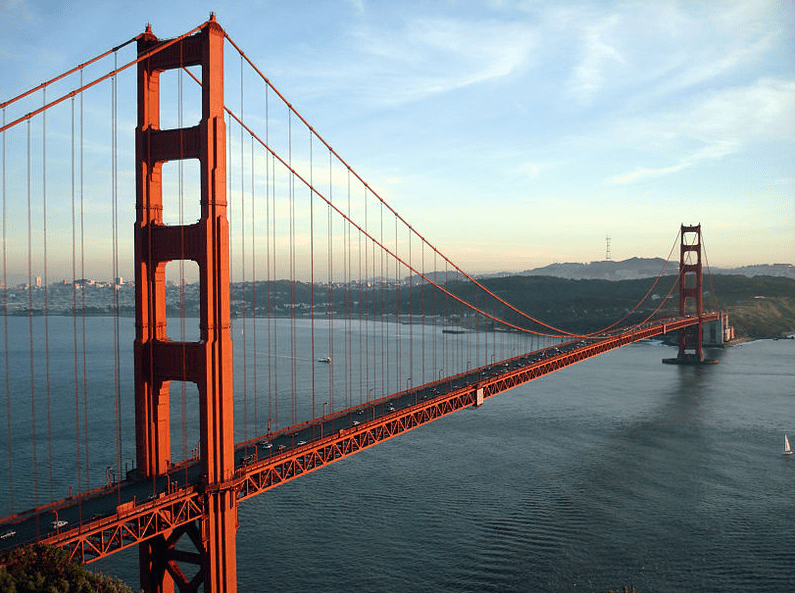 Photo: the Golden Gate Bridge at sunset. This photo was taken from the Marin Headlands looking south; San Francisco can be seen on the left. Credit: Rich Niewiroski Jr.; Wikimedia Commons.

However, on 28 May 1937 the impossible happened when the gleaming new Golden Gate Bridge was opened to vehicular traffic, the second day of a week-long “fiesta” celebrating the engineering marvel. The first day of the celebration, May 27, was marked by the opening of the bridge to pedestrians. 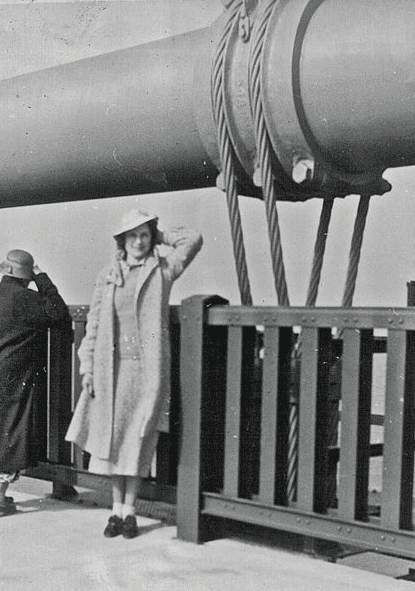 The Golden Gate Bridge, a 1.7-mile-long suspension bridge with two 746-foot towers, took more than four years to build at a cost of $35 million and the lives of 12 construction workers. The roadway is supported by two giant cables comprised of over 80,000 miles of wire, and 1,200,000 rivets hold the bridge together. It was the brainchild of engineer Joseph Strauss, with the help of many other gifted engineers.

The following two newspaper articles describe the festivities surrounding the opening of the Golden Gate Bridge. The first article describes the bridge’s opening on May 27 to foot traffic, when 202,000 people walked across the bridge, gawking at the unprecedented view of San Francisco while perched high above the water in the middle of the Golden Gate.

The second article describes the bridge’s official opening to vehicular traffic on May 28. The United States fleet was approaching San Francisco Bay after completing six weeks of war exercises, and 300 military planes flew over the bridge before 38 of the Navy’s largest warships steamed under it. Officials used acetylene torches to cut three chains – one gold, one silver, and the third copper – to open the bridge. Then, at noon in the White House, President Roosevelt pressed a button that lit up a “go” traffic signal on the bridge, and cars began streaming across at the rate of 3,000 an hour.

Here is a transcription of this article:

More than 200,000 Go across in First Twelve Hours of Its Opening

SAN FRANCISCO, Calif., May 27 (AP). – The bridge that couldn’t be built, a towering two-mile span across the Golden Gate, opened Thursday with a mad rush of pedestrians across its deck and a mighty cheer that figuratively echoed up and down the Pacific Coast.

Hailed as an achievement of the impossible and described mostly in superlatives, the $35,000,000 structure began its useful existence by bearing a milling army of visitors and San Franciscans all in fiesta mood.

Chairman Arthur M. Brown of the fiesta committee said the number crossing the huge span reached 202,000 at the end of twelve hours. He had expected only 100,000.

Nearly 25,000 persons rushed the toll plazas as a deep-voiced foghorn sounded the opening signal at 6 a.m. They let loose a shower of nickels at the coin boxes and rushed onto the great span from both approaches.

From then on the huge deck swarmed all day with humanity, some individuals racing for honors and others lingering for their first view from solid footing above the center of the famous harbor entrance.

Other uncounted thousands assembled on the San Francisco shore to witness a mammoth parade reviving the raw and hilarious days of the Dons and the Old West.

A threatened anti-Nazi boycott of the huge parade failed to develop, although German consular officials lodged a protest with Mayor Angelo J. Rossi because two unidentified men tore down a swastika flag from the street decoration two days ago. Rossi offered apologies.

Representatives of the powerful Maritime Federation of the Pacific, a unit embracing the West Coast seagoing and longshore unions, had threatened to boycott the parade unless the Nazi flag was removed. Rossi refused to order it down.

Pedestrian Day was designated as the prelude to the opening of the span to automobile traffic, scheduled for Friday, when highway traffic between San Francisco and the picturesque north coast area will have solid footing across the bay for the first time.

Despite the bridge opening, the Southern Pacific Golden Gate ferries arranged to operate on holiday schedule to handle the swollen stream of highway traffic expected to develop.

The bridge, expected to handle 3,000,000 vehicles the first year, has six lanes for automobiles and two walks for pedestrians.

Designed to withstand ocean storms, tides and earthquakes as severe as San Francisco ever had known, the bridge is deemed capable of supporting 430,000,000 pounds at one time.

Its 4,200-foot single suspension span, the longest in the world, is built so that storms coming in from the Pacific may sway it twenty-one feet out of line without injury. Heat and cold may contract or expand its huge steel mass so that the deck level may rise or fall ten feet without damage. Its strength is in its flexibility.

Its towers may lean a foot or more and yet spring back into plumb position without incident. The towers, 746 feet high, are built of enormous steel cells to give this resiliency.

Years ago the bridge was conceived as an engineering impossibility. M. M. O’Shaughnessy, then San Francisco City Engineer, however, asked Joseph B. Strauss, famous bridge builder, to design a plan for it.

“O’Shaughnessy told me,” said Strauss, “that it couldn’t be done in the first place, and that even if it could, the cost would be $130,000,000,” which would not have been economical in view of the purpose to be served.

But Strauss drew the plans in 1919. For ten years engineers, lawyers, geologists and traffic experts battled over its legality and feasibility.

Six Northern California counties finally banded together and voted a $35,000,000 bond issue for the job.

The project came through a welter of lawsuits and technical skepticism and construction started a little more than four years ago.

Despite the erection of a unique safety net under the deck, twelve men lost their lives in the building, but Strauss, the chief engineer, said the expected fatalities otherwise would have been twenty-six.

Strauss, who has built so many bridges about the world that he can’t remember where they all are, now wants to bridge the Narrows, which would require a 6,000-foot single span across the New York harbor entrance.

The fare is the same on both bridges, 50 cents for a car and five passengers. Pedestrians may cross the Golden Gate Bridge for 5 cents. The Bay Bridge has no pedestrian facilities. 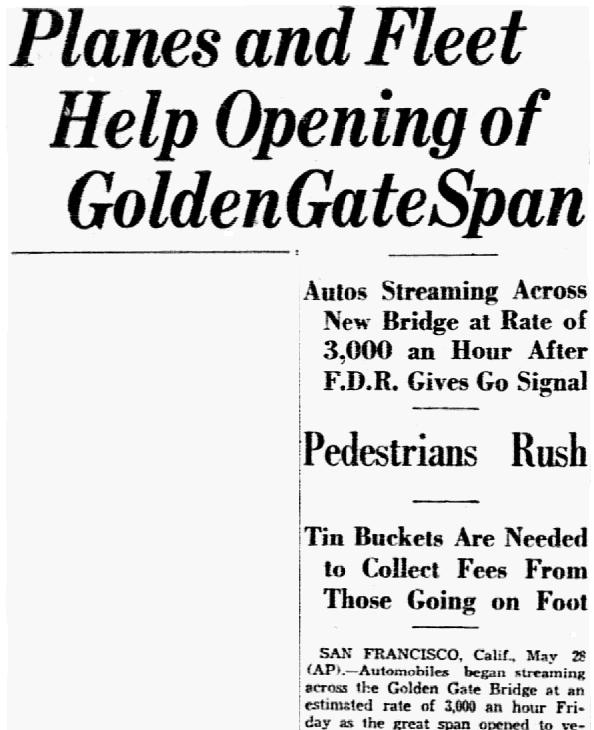 Here is a transcription of this article:

Autos Streaming across New Bridge at Rate of 3,000 an Hour after F.D.R. Gives Go Signal

SAN FRANCISCO, Calif., May 28 (AP). – Automobiles began streaming across the Golden Gate Bridge at an estimated rate of 3,000 an hour Friday as the great span opened to vehicular traffic with spectacular salutes from 300 fighting planes, the United States fleet and uncounted thousands who watched and cheered.

President Roosevelt gave the signal for the historic moment when he pressed a button in the White House in Washington at noon and the resulting electrical impulse lighted a traffic control on the bridge.

Massed naval planes, in the van of the approaching fleet, flew in from sea and soared over the $35,000,000 span an hour before opening time.

Both sides of the picturesque Golden Gate, San Francisco’s harbor entrance, were lined with crowds and motorists anxious for the “go” signal.

A rush of pedestrians complicated matters for the hard-working bridge personnel. Despite the fact that 202,000 pedestrians had tramped across the two-mile span Thursday in preliminary opening festivities, another 9,000 stampeded the barriers when the “go” signal flashed.

As was the case the day before, the computing coin boxes proved inadequate to handle the deluge of pedestrians’ nickels and the bridge management resorted again to tin buckets to catch the unexpected windfall.

Bridge officials said the vehicular traffic lessened slightly in the second hour as the flow filled the highway northward but that the movement was steady in both directions.

The week-long fiesta attending the $35,000,000 span’s opening reached a climax in the formalities by which the bridge was turned over to the district which financed it and put into full operation.

Several husky lumberjacks, competing for prizes, then attacked with saws a huge log symbolizing the last barrier. Paul Searles, Longview, Wash., logger, cut through the thirty-four-inch chunk in 2 minutes 47 4/5 seconds to win $250 first prize. Myron Higbee of Kellogg, Idaho, was second in 3 minutes, 24 seconds and won $150. Another $100 went to Ray Shull of Eureka, Calif., who required 4 minutes 47 seconds to get through the log.

More speeches and pageantry at the south terminal closed the official program. The rush then began across the gigantic band of steel and concrete which finally links San Francisco with coastal Northern California.

Just beyond the western horizon, the thirty-eight largest ships of the fleet, homeward bound after six weeks of strenuous war exercises in the Pacific, formed in line to pass under the big bridge and anchor in San Francisco Bay to add 30,000 men to the celebration.

Note: An online collection of newspapers, such as GenealogyBank’s Historical Newspaper Archives, is not only a great way to learn about the lives of your ancestors – the old newspaper articles also help you understand American history and the times your ancestors lived in, and the news they talked about and read in their local papers. Did any of your ancestors cross Golden Gate Bridge on opening day in 1937? Please share your stories with us in the comments section.

Video shows cop punching restrained woman who was in mental...