The DTS moniker first appeared in 2000 on a high-performance version of the all-new DeVille (formerly Sedan deVille). The DTS name stood for “DeVille Touring Sedan”, and it featured a 300-hp version of the DeVille’s 4.6-liter Northstar V-8 (up from 275 hp in the base car) and stiffer suspension tuning.

In 2006, what would have been the next-generation DeVille was officially named DTS, by which time it was the last front-drive car in Cadillac’s lineup. Technically the DTS was an update of the 2000 DeVille, with updated styling that reflected Cadillac’s new “Art and Science” design theme. It shared its “G” platform with the Buick Lucerne, though the DTS was longer and wider and featured more backseat space and trunk cargo capacity. Like the DeVille, the DTS was powered by the 4.6-liter Northstar V-8, with horsepower ranging from 275 hp to 291 hp depending on trim level.

The DTS was available in Standard and Performance trims for 2006. In 2007, the Standard trim was divided into Luxury I, II and III models, with a new top-of-the-line Platinum trim level introduced in 2008. In 2009 the model lineup was shuffled yet again, to Standard, Luxury, Premium, Performance and Platinum.

Cadillac produced an extended-length DTS-L for 2007 and 2008, which had an 8-inch stretch. The DTS was also popular as a hearse and limousine, with Cadillac offering a coachbuilder chassis for easier conversion.

The 2000 DeVille DTS had the first night-vision system installed in a production car. It used an infrared camera mounted in the grille and projected an image of the road ahead into the lower portion of the windshield.

The 2007 DTS-L used standard-length DTS rear doors with an extended C-pillar. At the time, Cadillac said this design provided privacy for VIP passengers. In 2008 they introduced a version with a longer door and a more conventional-looking C-pillar.

Cadillac built a DTS Presidential State Car in 2005 which was used by President George W. Bush during his second term. Though it was styled to resemble the DTS, the Presidential limousine was actually based on a four-wheel-drive Escalade platform.

The DTS has yet to attract attention as a collector vehicle, and probably won’t do so any time soon. For those looking for a comfortable, old-school Cadillac, the DTS is easy to find and very reasonably priced. Performance models, which feature GM’s magnificent Magnetic Ride Control suspension, will probably be the most desirable models for enthusiasts. As the DTS was popular with older drivers, there are plenty of good low-mileage examples to be found. Look for cars in Florida and Arizona, rust-free states popular with retirees. Bear in mind that the Northstar engines are prone to electrical issues that can be difficult and expensive to fix. 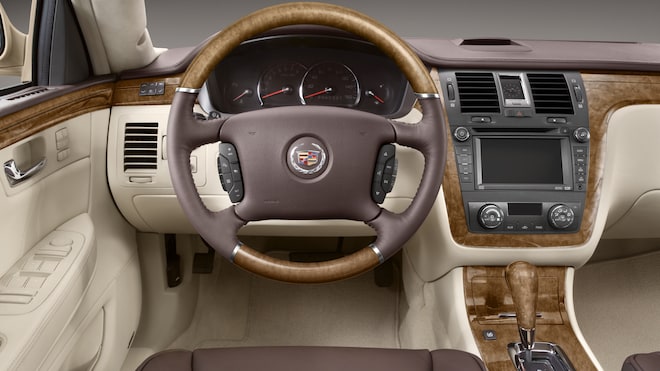 Early speculation about the next front-drive Caddy

Engine that starred in the DTS makes its final bow

If you’re looking for old-school luxury—tons of space, a pillow-soft ride, and V-8 power—the DTS is a great find, especially as you can buy them dirt cheap. They are not the most reliable cars, and some of the engine electricals can be finicky and expensive to fix. As always, be sure to get a pre-purchase inspection by a qualified mechanic.

What does DTS mean?

DTS stands for DeVille Touring Sedan. It was originally a performance model of the DeVille, following the STS (Seville Touring Sedan) and ETC (Eldorado Touring Coupe), and in 2006 the name replaced DeVille as Cadillac shifted to alphanumeric model names.

When did they stop making the Cadillac DTS?

Yes, the Cadillac DTS uses front wheel drive, as did the DeVille that came before it and the XTS that succeeded it.

What is Grid Computing?

Wholesome TikTok shows a dad greeting daughter every day through...