The ‘World War Joy’ tour has been criticised 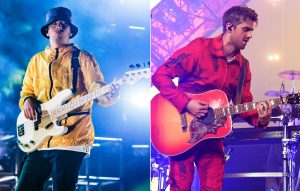 Twenty One Pilots’ Tyler Joseph and The Chainsmokers’ Andrew Taggart

Twenty One Pilots fans are criticising The Chainsmokers for perceived similarities between their recent tours. The ‘Stressed Out’ rockers began the ‘Bandito’ tour in October 2018 and received praise for its complex staging, which featured elaborate pyrotechnics and burning cars. Now,  The Chainsmokers have been criticised after beginning ‘The World Way Joy’ tour – which […]

The post Twenty One Pilots fans accuse The Chainsmokers of “ripping off” their latest tour appeared first on NME.